'THE POWER OF THE DALEKS'
Reconstructed

**Check out my latest Blog in the link above**

***Please sign the guest book before leaving if you can. Thanks.***

On the 5th of Nov, 1966 the first episode of 'The Power of the Daleks aired.  It was a very important time for Dr. who. First, William Hartnell was leaving the show due to ill health, which meant someone had to take over the role.
This was where the ingenious idea of Regeneration, or as it was called then 'renewal', was born.

Patrick Troughton stepped into the role as a cosmic hobo style Doctor, with baggy trousers and ill fitting jacket. This was toned down as the series went on, but for his debut story he was to face one of the most famous villains of Dr. Who,  the Daleks.

Unfortunately except for a few clips, tele-snaps and publicity stills, this story only exists in audio form.

This website will catalogue my personal attempts at reconstructing visually the lost episodes from this great story through the use of CGI animation
and live action.

**AS WE  ALL KNOW THE POWER OF THE DALEKS HAS NOW RETURNED IN ANIMATED FORM FROM THE BBC, SO THIS PROJECT OF MINE HAS NOW DRAWN TO A CLOSE. I WILL LEAVE THIS PROJECT AS AN ARCHIVE FOR EVERYONES ENJOYMENT.
THANK YOU TO EVERYONE WHO SIGNED THE GUEST BOOK AND SHOWED SUPPORT OVER THE YEARS.**
Experiments with a new model 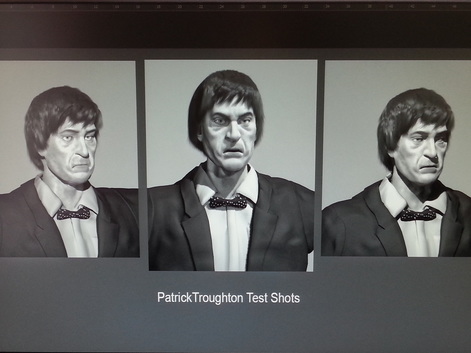 *****BIG THANKS TO EVERYONE WHO IS DONATING TO MY CANCER RESEARCH LINK ABOVE! ****

Doctor Who remains (c) BBC . This website is created for all those fans passionate about those lost Dr Who story's. It is not connected to the BBC in anyway. Please support official releases of Dr Who merchandise.
google2b94e983843e1dc3.html