New work has begun on creating a more realistic model of Patrick. Various capture software including some new face capture software is in the pipeline to be used for recreating more natural face movement. Below is a still of a quick test. The model is going through various stages of refinement and in some cases a total re-model.

I've just begun work on clothing dynamics which is causing some problems at present with software issues. However I hope to have this sorted out soon. 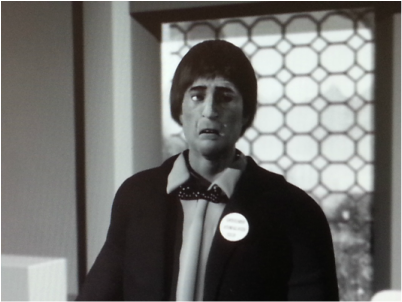 Work has just begun on the office set. We see Lesterson wheel in the Dalek for everyone to see, it recognises the Doctor instantly!

Check out my latest blog to find out how the live prop making is going. Whats happening this minute? Well, I'm working on adding some live footage to Episode one of 'The Power of the Daleks' Early tests look promising and will be posted for viewing as soon as they are uploaded. Please remember,these are TESTS, and will be altered as I work on them.

Stay Tuned. You can view loads more animations over at my youtube site: http://www.youtube.com/whovisions
google2b94e983843e1dc3.html